So Monday night was the Detroit Freedom Fireworks. I actually think it’s called something like the Target sumpin sumpin fireworks but you know. It was in Detroit and it’s Freedom Fireworks and it happens like 2 weeks before the actual 4th of July.

So last year Lou and I needed some time together so we went to the Marriott Renaissance hotel in downtown Detroit and we had a lovely river view and so we had the idea of going down for the fireworks. Well, it all worked out. 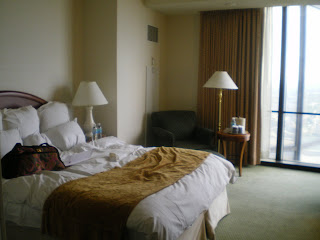 On Monday the lovely Michelle (aka maddiwoodfarms on Ravelry) came to close up the shop after the Sharon Winsauer class so I could get on down to the city before they started closing off streets.

It was a beautiful room with a very fabulously comfortable bed. 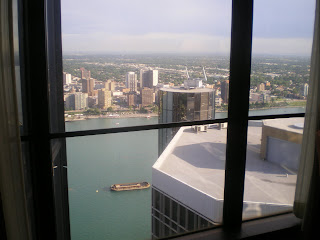 We had a fantastic view. The boat you see on the river is one of the barges they shot the fireworks from later. There were three of them all together.

The city you see across the river is Windsor, Ontario, Canada.

Luckily…well not so luckily I guess, my darling travels way too much and so they always upgrade his room if we stay in a full service hotel so we had a nice dinner in the concierge lounge complete with ice cream. Then Lou took the kids down to the first floor to see the car display from GM and I got a little quiet knitting time. 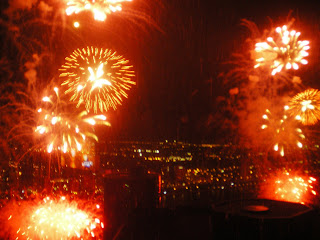 The fireworks started at 10:05 and we turned on the TV so we could hear the music that they were playing.

It was really beautiful and really fantastic to see the fireworks at eye level. 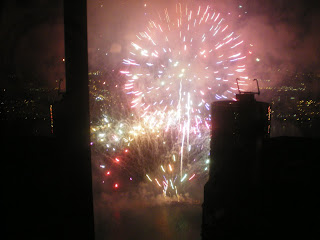 The explosions were just shaking all the glass in the building. 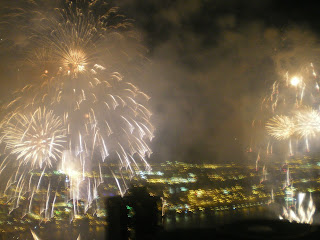 Fantastic. I think this might be a family tradition.

So let’s talk about some not so fun stuff. The arguments over who will push the elevator button. we have now graduated to who will press the inside or the outside button.

Maggie: You push the button, I’ll push the other one.

Ryan: No, I want to press the uver one.

Maggie: No I get to press it because you can’t read numbers.

Ryan: No you press this one.

Then there’s a stand off and Lou end up pressing both inside and outside buttons. Nobody’s happy. 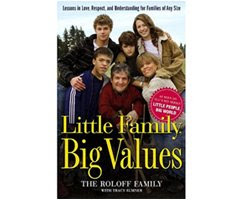 Also, this past weekend was the Little People Convention in Detroit. The hotel was full of the little people but I was on the look out for one special family.

Tuesday morning we had breakfast and we were waiting for our car and there was a star sighting. Of course I wasn’t fast enough with the family but there went Matt Roloff and my lovely little overnight was complete.

Please enjoy this little video. I chuckle every time I watch it. You should know that no children were injured in the making of the video.