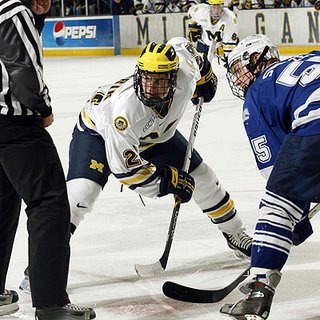 This is where I was last night and tonight. University of Michigan Hockey. Last night they beat Alabama Huntsville and tonight they beat UConn.
Tonight’s game was a bit surprising though. If I remember correctly, at the end of the first period it was 4-0. At the end of the second
period it was 6-3 and the final score was 7-5. The UConn guys really came back hard and I was impressed with the changes. Michigan still won and that’s what’s important here though.
Problem is, tonight UM is playing Penn State in Football. When that happens you gotta go with your home so it’s Happy valley for me because if God wasn’t a Penn State fan then why is the sky blue and white? 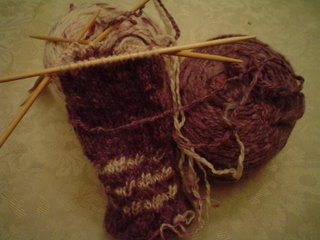 this is what I did while I was watching the game. The colors are bad because I took the picture at almost 11PM. That yarn is a lovely shade of purple handspun that I bought a couple of years ago before I even thought about spinning. That is going to be 1/2 of a pair of fingerless mits. The pattern I’m using is from Knitty Summer 2006 Called Fetching. I promise a better picture when they are done. 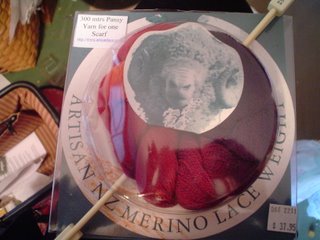 I promised a while ago – before I got sidetracked with super secret stuff that I would have pictures of the stuff I bought in PA when I was there 2 weeks ago.

This is a little scarf kit. Comes with the needles and the yarn is from Margaret Stove. It looked like a cute little kit although I think it was a little pricey. But hey… 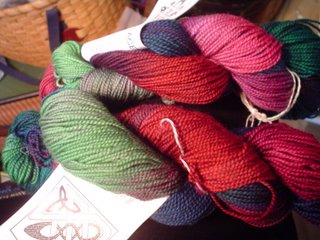 Here are two skeins of sock yarn from Interlacements. I don’t currently have a clue about the color since it’s only a number on the band and I am too tired to run upstairs to check right now. If you wan to know ask and I’ll look it up for you.

I love the colors and the picture is pretty true. 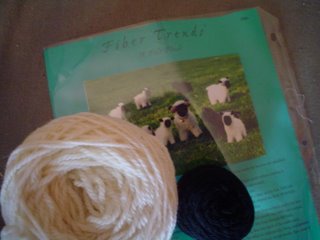 And a little kit to make a flock of cute felted sheep. You never know. I’m not sure what kind of wool it is because it was already wound up in the kit with no tag. It feels nice and I’m going to felt it anyway.

I am leaving for Rhinebeck on Thursday morning with my niece Sarah who’s flying here on Tuesday from Colorado Springs. We are stopping in Niagara Falls overnight and then leaving ridiculously early on Friday morning to get to the fairgrounds in enough time to drop off my entries.

I entered a skein to 2 ply wensleydale in natural grey, a skein of laceweight (I haven’t spun any yet that I think is worthy) and my Lily of the Valley Shawl. Wish me luck. Unless you are entering something yourself – then you don’t have to.

Our other two traveling mates pooped out on us. Betty is going to a Navajo weaving class instead and Kelle sold her stinkin’ house and can’t go now.

I’m back and forth about a class I wanted to take because I don’t want to leave Sarah alone for 3 hours while I go spin. Well I’ll take a wheel and decide when I get there. The class I want could be sold out and then there’s nothing to decide anyway.

I’ve saved my money for a Golding spindle and my plan is to get Sarah spinning before she goes back home. She’s a great knitter. She taught herself from a book. She’s fast as lightning and is already designing her own stuff. Amazing for a 19 year old. Her mom’s blog is here with a picture of Sarah a little while ago.

O.k. I have to go to bed but I will try my hardest to have some knitting updates tomorrow.

5 thoughts on “Hail to the Victors Valiant, Hail to the Conquering Heroes”