In which it all turns out alright in the end. 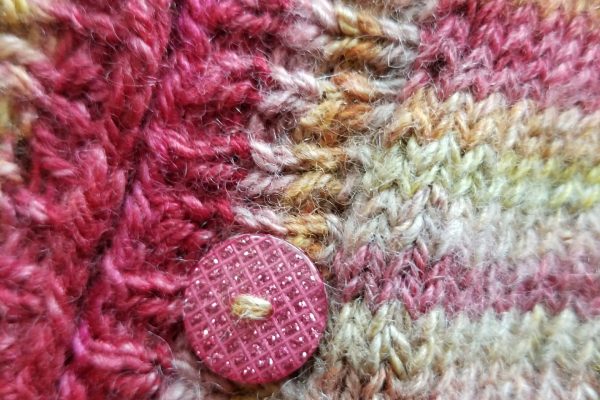 In January of 2012 I made some yarn from wool that

was dyed by Amy King. I told Amy I had some yarn for a sweater and couldn’t find a sweater that I wanted to knit with it. I told her the particulars and she kindly designed a sweater to my specifications for me to knit. The yarn is made from a BFL/Silk blend. Spun with a short forward draw and chain plied.

In December I began to knit the sweater.

I am not a fast knitter and for the last several years I haven’t been very dedicated to knitting projects as I have been distracted by my loom. That doesn’t matter because I need sweaters and I keep wearing out the few that I have that I wear all the time.

So, I would put this project down and pick

it up and time would go by and progress was slow. Like seriously slow. In 2015 I finished the body but I didn’t understand some instruction or other and so instead of asking Amy (who I talk to regularly) I threw it in the corner for a while.

I know it’s a bad picture but it’s all I have. But you can see it just needs sleeves and button bands.

The problem is at this point I tried it on and so, in addition to having a little issue with my comprehension, I thought it didn’t look very nice on. But that could have been because of stitch holders and stuff.

Anyway in 2016 I finally asked for help and it all made sense. Sleeves were added. I tried it on again.

Not beautiful. The hemline hit me right at my widest spot. It was not cute. So again, the thing went into the bag and into the corner.

Lucky for me, Amy and I were teaching at MAFA together this [ast July so I brought it along to show her. She thought I was just being hard on myself. When I put it

on for her we all were in agreement that something needed to be done.

Let me just say here that this project pushed me to my knitting limits. I’m generally a pattern follower and this was not complete step by step instructions because Amy assumes that I know things. I had to use some common sense and also be brave and try some things.

I had a sweater with me that I love and wear a lot. It’s waist length and I think it’s pretty flattering so we decided to go with

that. This was again pretty scary. I picked up stitches at the length I thought I needed and snipped a thread and removed the bottom of the sweater.

As soon as the bottom was removed I started knitting ribbing with the yarn from the bottom that was cut off.

You would think that that would be the end of the story, right? Nope, I got nervous about the button band and ribbing around the neck and about shaping and how many stitches to pick up and how the heck to make a good button hole….

So 2 more months went by while I gathered my courage.

It was good and cute. I had bought several different buttons

to try. And with my lack of button hole making knowledge I just went ahead so that narrowed my choices for me.

In the end I have lots of yarn left over and some cute buttons to use on another project. I think I need to get spinning for something other than weaving.

By the way, if you aren’t familiar with Amy and her work you can check her out at her store website and her blog.