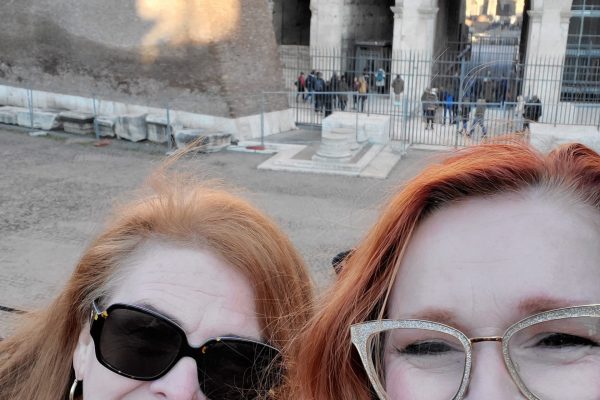 I had the opportunity to go to Italy in the middle of January. It’s taken me this long to process the trip. It was a whirlwind. And I felt a little guilty because we had just returned from our family vacation to Disney World a few weeks before but when someone offers to fly you to Italy for a week, are you gonna say no?

Five years ago this week my friend Dana and I took a girl’s trip to Disney World. It was so fun. We went to the spa at the Grand Floridian Hotel. We saw every princess. We rode rides and ate all the things and just had a magical time. We decided to do it because our birthdays are in February just one day apart. I was turning 50 and she was turning 55 so we decided to celebrate.

This month I will turn 55 and she is going to be 60 so we felt like something great was needed to celebrate again and since Dana and Jerome sold all of their stuff and have been travelling around the world for the last 18 months she flew me to Italy to meet her.

It was nuts though. She told me before I arrived to save all my jet lag for when I got home because we didn’t have time for that nonsense.

I landed in Rome on Tuesday evening after 21 hours of traveling but she was true to what she said. We went to eat at an awesome restaurant that Cake Travel Company suggested and drove around the city for a bit. Then we drove to a little apartment we were staying in for two nights which is right near the Church of Jesus Christ of Latter Days Saints Rome Temple.

The next day was a scheduled day to see the Coliseum, visit a couple of fabric stores, visit the Sistine Chapel and visit the temple. I just want to talk a little about the fabric stores we visited. There was one that was suggested and it had some good reviews on Google. Of course we had never been there so we were just following advice. While walking down the street we were passing a different fabric shop called Bassetti Tessuti and decided to go in. Well, let me tell you, that store was marvelous. They were so kind and patient. I had a budget I was trying to stick to and they had no problem unrolling lots of fabrics for me to look and and drool over and consider. In the end I bought cuts of two different fabrics and walked away from a lot of others that I would have loved to have.

Before I bought any though I wanted to visit the shop were were initially walking to. Honestly, I can’t remember the name of that one. We spent maybe 10 minutes in that store but I couldn’t stop thinking about the fabrics I left behind at Bassetti so back we went.

I had spent so much time touching and oohing and aahing that we were going to be late for our Sistine entrance time so we had to take an Uber rather than going back to the parking garage to get the car and drive there. Afterwards we we walked a bit and saw a little of the city before getting our car to head back out of the city to spend time at the Temple visitor’s center.

In the morning of the third day we were on our way to Milan with a short stop in Pisa because why wouldn’t you when it’s on the way. It is a long drive but here is my one observation. The Italian countryside looks exactly like the movies show. You know how sometimes you are watching a movie and it has a town or city that you are familiar with and you know that they just shot it in the most charming areas or parts that look a little cliche? Well, Italy looks like the pictures. The houses, the trees, the farms, just beautiful.

We stayed in the darkest hotel in the world in Milan. It was called the Da Vinci Hotel. I chose it because it was painted the color of raspberry sherbet and the price was within our budget. There was not one ceiling lamp and not one floor in the whole room. The lighting was very moody and artistic with small lights that pointed toward the ceiling or a light switch that turned on lighting that came from behind the television. When we asked for an iron they said they had an ironing room that we could use which ended up being a conference room with two ironing boards and one iron set up. Lest you think I am only full of complaints here are the pluses. It was clean and the beds were comfortable. Breakfast was included and it was a massive breakfast buffet with a lot of choices – take that Fairfield Inn!

The minute we arrived in Milan we drove to visit Lunatica Milano. I have been following their Instagram account for a long time and their clothes are beautiful. I did get myself a tshirt and while were there we got a recommendation for a fabric shop. So the next morning were were up early-ish and our first stop was a little store called Tutto Per La Sarta (Everything for the Dressmaker) which is a store that opened in 1933. It’s a haberdashery shop and I was hunting for buttons. I was not disappointed. I talked to the man behind the counter in crazy English and somehow got him to understand what I was looking for and he began pulling out roll after roll of the most beautiful buttons. it was a sight to behold. I did bring home enough buttons for a coat project I’m going to be working on this month.

After that we went to Valli Tessuti which is the place recommended by Lunatica and I thought I might die. This is the store that I regret leaving a piece behind. I don’t regret what I bought but I wanted both. Maybe someday I’ll be back in Milan.

We hung out in a little square and ate gelatto until we thought we should try to find where we parked the car. That was an adventure trying to find out way back to the undergroud parking. We had to ask for help and a nice guy from a store we went into walked with us all the way to the car to make sure we were safe.

On the way back to our hotel that night we stopped at a grocery store and Dana made me go in by myself. I was very nervous. My quest was something to eat for dinner in our beds while we watched a movie on my computer. I got 3 kinds of cheese, some salami, a couple of types of crusty bread and 500g of butter. It was a feast. And I did ok inside the store.

Next day we’re on our way to Florence. I’m getting really tired by now but there was no time to stop. We stayed in a convent and it was a really nice place to stay. Clean and large and looked over a courtyard that was beautiful even in winter. We saw the David and some other early Renaissance art. It was really beautiful and just amazing to see. Plus, I didn’t realize the statue of David was so tall. I did bring home some small leather purses for my girls from Florence and a couple of funny tshirts for Ryan. We ate in a place that reminded me of Penn Station in Philadelphia and I wished we had more time in that city to walk though all of the vendors and see more of the city.

The next day was Sunday and so we had to head back to Rome so I could catch my flight the next day. We stopped for lunch in a little city called Siena. That’s another place I would like to go back to and spend a little time. Then on to Rome where we stayed at the Marriott by the airport and ordered a ridiculous amount of food from room service.

In the morning when Dana took me to the airport I walked away pretty quickly. And I feel bad about it. There were two things going on. I didn’t want to cry was a big one. The second one was I’m not a great traveler and I had two very tight connections and so I was freaking out a little about making all of the planes. I do begin to worry in advance and so the bit of anxiety started on Sunday and was just getting bigger. In the end it was all ok. Like usual. But something about travel logic and my brain don’t mix.

But it’s all behind now and I cannot believe I went to Italy and spent a whole week driving fast around that country seeing the sights with my fearless friend.