There will be some name dropping in this post as well as some dropped names as I forget some names and will need to edit them later as I get them. 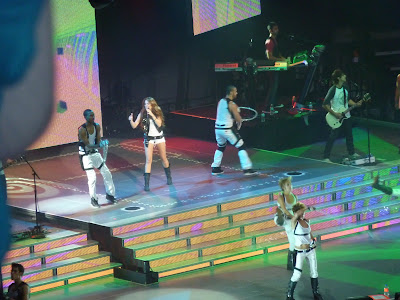 First name is Miley Cyrus. Yep. Last Thursday I took Maggie and Chelsea to her concert at the Palace of Auburn Hills. They sat together. I sat in in a neighboring section. And FORGOT MY KNITTING! 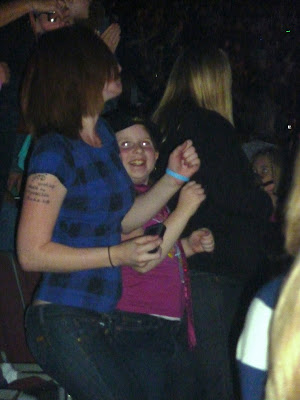 Maggie and Chelsea didn’t have time to knit. There was lots of dancing and singing and happy going on. 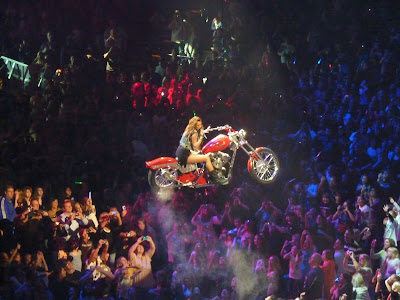 Miley flew over the sudience on a motorcycle. made it all worth the price of admission (if you ask Maggie).

The concert was Tuesday night and then I got up bright and early on Wednesday morning and headed off to Colorado for the Schacht Anniversary party and Dealer Day.

On Wednesday evening we went to Jane Patrick and Barry Schacht’s house for dinner. Lovely spaghetti and home made sauce as well as great company. Stephanie was there (the Schacht voice of unmatched customer service and sales, as well as talented spinner, weaver and teacher.) Melissa was there. Weaver Extraordinaire. Steve Denkin of Unicorn Books. Liz Gipson formerly of Interweave and now working for Schacht Spindle. And Cindy Lair the Production Manager at Schacht and my pretend girlfriend. How’s that for a big name drop right off the bat.

Well it doesn’t end there. 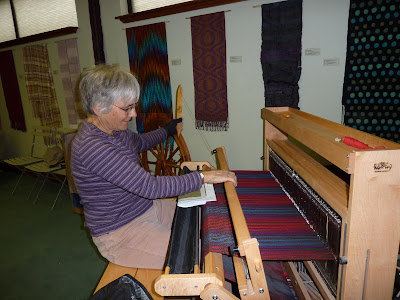 On Thursday I had a lunch date with Deb Robson and while I waited I was delighted to share the Schacht showroom with Betsy Blumenthal and gain some weaving light from her. 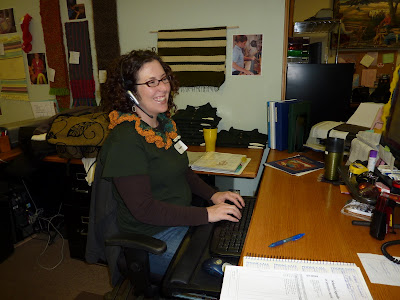 Here’s a photo of the beautious Stephanie. Lovely voice on the phone and the one who tells me what’s hot and what I should be stocking. 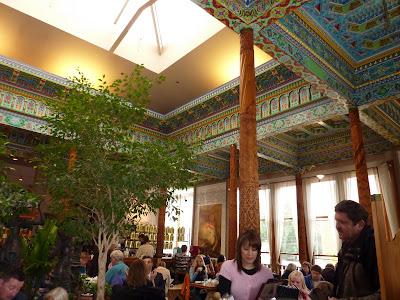 The rest of the day is a blur and I have very little to show for it as far as photos. Deb came and off we went. First stop was at the Celestial Seasonings factory. We took a great tour and I learn a lot about tea and herbal teas. of course there as a little shopping at the end of the tour.

Next we went to the Dushanbe Tea House. It is beautiful. I’ve linked to their website. The history of the building is very interesting and if you have time to go through the links it is very worth it. 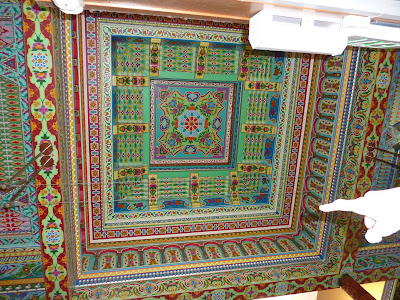 This is a photo of the foyer ceiling. I couldn’t get a good photo of the carvings and the detail of the hand painting.

After a delicious lunch we were off the Shuttles, Spindles and Skeins for some shopping. I got some great books. Then to hurry back for the Schacht factory tour and party where I sat across the table from Ann Budd and chatted with Marilyn Murphy and Linda Ligon and so many others. My sister was at the party because she lives in Colorado. she accused me of being star struck. So? Plus, I’m not sure it’s star struck exactly. More of an awe of the talent. 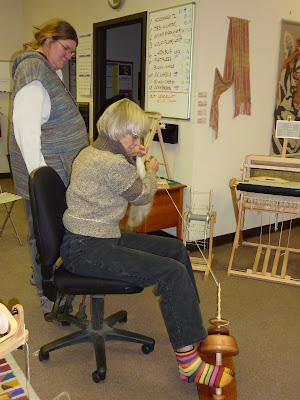 After the party we spent some time in the Schacht office checking out a new kick spindle from True Creations. That’s Deb Robson trying it out while Morgaine, from the fantastic shop Carolina Homespun, offers opinions. 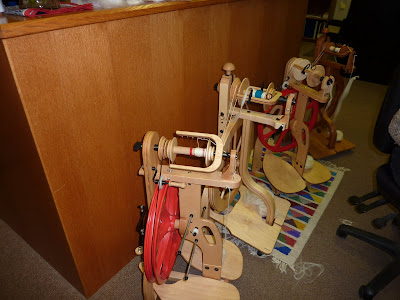 The wheel lineup in the Schacht office with two of the wheels sporting the soon to be shipped bulky flyers. 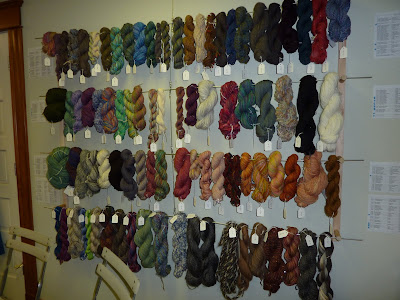 The yarn wall from the “I Made it on My Schacht” contest. There were lots of beautiful yarns. It is obvious that I am a spinner at heart because I took no photos of the weaving entries. I didn’t even notice that until now. 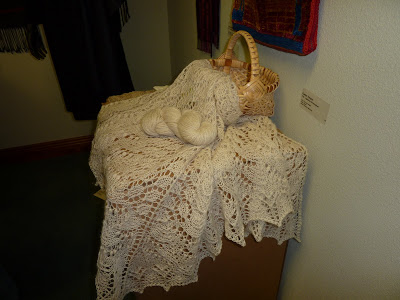 This was one of my favorite entries….Llama. 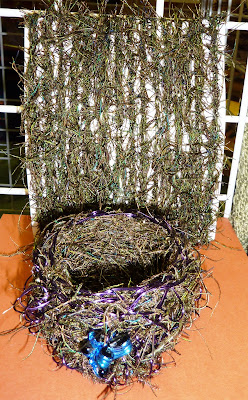 This was the winning yarn made by Jeanine Glaves. A delightful lady I’ve met at SOAR. She’s fantastic and so is this yarn. It is core spun peacock feathers whcih was then woven into a little basket. Just cute…not a great photo however. 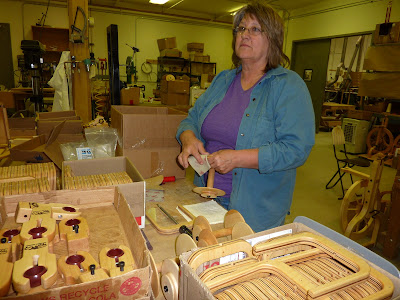 Friady was dealer day and it was a full day of discussion and education. This is a photo of someone who I can’t remember her name. But notice the boxes of flyers and front maidens for the bulky. They’re almost ready! 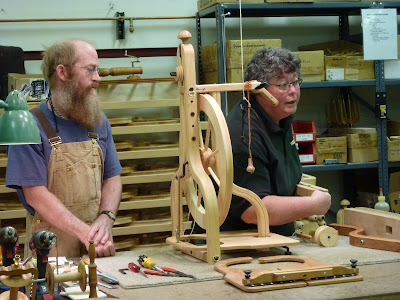 In this photo Cindy is giving direction for Matchless maintenance as ….that guy who I forget his name…patiently waits for us to get out of his work space:-) He’s the guy who puts all the Matchlesses and Schacht-Reeves together. We want to be his friend.

It was a full day. We also learned about loom construction, had a little rigid heddle instruction and a lot of other instruction with a dealer round table at the end. Very fun and tiring and good. 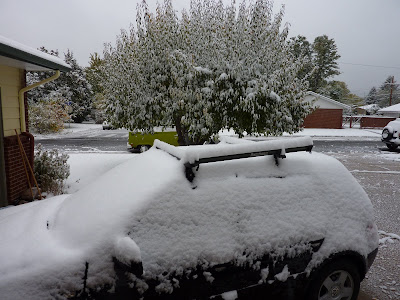 Saturday morning we woke to this! It didn’t stop us though. Breakfast was great. I had this thingy…french toast dipped in pancake batter with nuts on it. How can you go wrong?

Then back to Shuttles where I bought a couple of shuttles as well as some other nuggets and talked to Maggie Casey (see how I snuck that one in there?) and got to see and advance copy of Abby’s new book. It is beautiful! Everyone should have it in their library. It is one of those books. And I’m not just saying that.

Then to the pedestrian mall to a new little shop called Gypsy Wools. Lovely. She has a love for the long wools so we were fast friends. While there I had an opportunity to chat with none other than Cheryl Oberle. Yup. It’s true.

Some lunch, more shopping, dinner with Stephanie’s lovely husband, Dan (who was so nice to let me stay with them) and Cindy and Cindy’s Partner Sally. Fun.

Sunday morning we even found time for a little weaving lesson where I learned how to use lease sticks when warping the floor loom from front to back. It was a revelation.

How was that for name dropping? I know there are a couple I forgot. Really. Really.

Back home I came and now I want to sleep for a month. I did come home with lots of new ideas for the shop and a renewed excitement. Keep your eyes peeled for newsletter announcements.

In the mean time, don’t forget about the sale going on right now. Everything in the shop is 10% off. Everything. Plus. if you spend more that $100 you get to be ina fantastic drawing that includes spinning wheels and fibers and handspun yarn and gift certificates. Jump on over to the webstore to see what you can find!