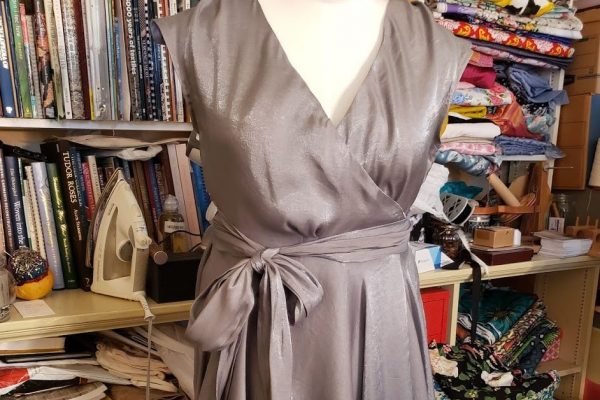 So, I had a pattern in my stash that’s I’ve been wanting to make. It’s McCall’s 7627. I bought this pattern last year but hadn’t gotten around to making it yet.

So, pattern, check. She liked it. Then I dug around in the fabric stash a bit and found a few shiny options. One of them was a metallic grey that is made out of Rayon I believe. It was one that I bought at a discount and it wasn’t on a bolt when I picked it up so I’m not actually sure of the fiber content.

Here’s the thing. It was completely opposite of all of the fabrics that were recommended on the pattern envelope. It called for gingham and cotton and crepe back satin. Fabrics with some body built in.

I should have known it was not going to be great right off the bat when I was having trouble lining up the selvedges and keeping the fabric on grain. I actually ended up cutting the pattern out on the living room floor so that I could pin the edges into the carpeting.

I did sew just the bodie together for a fitting and after I took about 2 inches out of the shoulders we were feeling pretty confident that all would be well.

There are a ton of problems here and they became more obvious when Maggie tried it on. Some were because she is short waisted. Some were because the fabric lacked any body – it would be great for a dress cut on the bias though. Some of the problems, I think, are from a giant cutting line being on the bias and possibly that the pattern piece wasn’t truly on grain when I cut it.

We both hated it. Although it took Maggie a little bit of time to get the courage to tell me. I’m not scary. I promise.

So here’s the plan. Eventually I will get back to this dress. I’ll remove the skirt and the ties, add a waist band and make it a wrap skirt. I think it would be great as just the skirt. But we’ll see.

In the meantime, I cut out a new dress. Stay tuned. I’l be showing it off in the next couple of days.