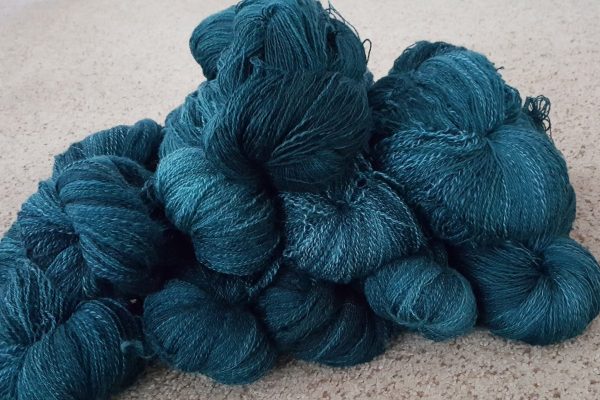 It seems like it’s been ages since I have done a blog post and I suppose it has. I’ve been super busy and trying to figure some things out with this current skirt.

So, let me bring you up to speed if you haven’t been following along.

This skirt will be Blue Faced Leicester spun from top that I bought from Spunky Eclectic in the Calypso colorway. The last fabrics were slightly heavier than I wanted. Well, they are great for winter skirts but much too warm for year round wear. My ultimate goal is fabric about the weight of wool suiting. I expect I’ll get there by the time I’m seventy…

Anyway, This skirt started as one idea and has changed over the time I was spinning the yarn. The reason for the change is the same reason this project keeps morphing; I keep asking questions and need answ

So, I decided in the midst of the spinning that I wanted to use singles for the weft rather than the 2 ply I had originally planned. The thing about the singles was that I wasn’t sure how to finish the singles before weaving with them and so I needed to do some sampling.

The singles for the weft are all still on bobbins so I’m not sure exactly how many yards of singles I have but I still have about 8 ounces of fiber that can be spun. Th

The original plan was to make a 36 inch wide fabric that was 10 yards on the loom but I knew I needed to do some sampling. To avoid having to spin thousands more yards of 2 ply I decided to change the skirt design to be similar to the first 2 skirts – a six gore skirt. That cuts down on the width of fabric needed.

So, I made the samples and I finished them by soaking them for about 15 minutes in hot water with a bit of Soak Wash. After they soaked I turned on the agitator and checked the samples after 5 minutes and then allowed them to agitate for another 5 minutes – 10 minutes total.

After the soak and agitation, I let the water spin out and I put the samples in the dryer with a towel for 5 minutes. I removed them from the dryer and they were still a bit damp. I pressed the samples with a hot iron until they were pretty dry. I laid them flat to dry the rest of the way.

And now it’s time to make a decision. I have photos and I’ll try to describe how they feel. Although I wish you all could come and touch them..

The photo above is from the singles that were not finished in any way before weaving. The left sample is the unfinished/right off the loom fabric and the one on the right is the finished fabric. The photo shows a bit of tracking but that isn’t obvious when you look at it in person. The hand is nice and drapey even though this on was a bit stiff or firm with very little drape. The measurements of this sample before finishing was 12″x11.75″. After finishing it is 11.5″x10.5″. There was a lot of shrinkage on this sample which I definitely expected because the weft was not preshrunk by soaking or washing.

This sample is the one that was woven with the blocked singles. The unfinished fabric  is less stiff than the one from the yarn right off the bobbin but the hand of the finished fabric is very similar to the last. The original size of this sample was 14″x11.5″ with the size after finishing being 13″x10.25″  So it has about the same shrinkage as the yarn directly off the bobbin. This makes sense logically.

This sample is the one that was woven with the yarn that was washed and then allowed to dry in its relaxed state. This sample showed a lot of tracking on the whole width and length of the fabric. This is not the look I’m going for in this project but It’s interesting to see it and know that if I wanted a fabric with some added texture this might be a good choice for weaving. It’s also a bit fuzzier and has less drape. The original sample was 11″x11″ and the finshed piece is 10″x10.25″.  So less shrinkage than the first two but it isn’t the fabric that I’m looking for.

Just for the sake of science I’ll show the 2 ply weft sample:

This fabric is lovely, no tracking at all. The original measurements were 12″x9.5″ and the finished measurement was 11.25″x9.25″. Definitely less shrinkage. It feels a bit thicker which makes sense and has a bit less drape than the samples with the singles weft.

Let me know what you would do but I’m thinking that weaving with yarn right off the bobbin is going to be the choice. It will be less work than the samples with the washed yarns and it gives a lovely fabric even though there is plenty of shrinkage.

The loom is sett at 24″ wide total and with draw in after weaving is about 22.5 inches before finishing. So I can probably plan on at least a 20.5 inch wide finished fabric to use for my project. And because I made samples smaller than the original plan I think I will have at least 11 yards of fabric after finishing. I wonder if that’s enough for a dress…short sleeves of course.

I’m excited to hear what you think….