Sneakers and Santa and Shooting and Spindles

It’s been quite a week so I’ve got some picture highlights.

On Thursday afternoon we went to visit Santa and give him our Christmas list. Well, half of us did anyway because I think Santa has a lap weight limit. More on that in a minute.

On the way home from Santa and the mall we stopped at Marshall’s because Maggie needed new sneakers – again.

She is a girl after my own heart. 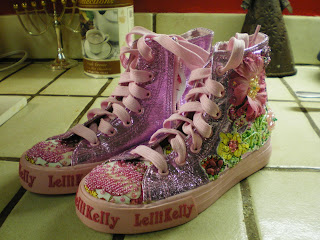 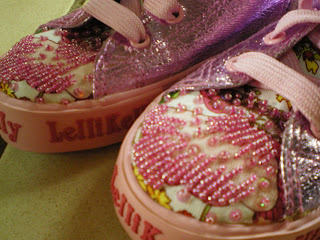 Here’s a closeup of the toe. 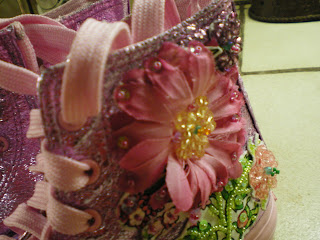 And the high top. We were in Nordstrom at the mall and saw other shoes from this maker for almost 3 times what we paid. I was quite surprised to find them and once Maggie saw them it was all over. So here they are with Santa. Maggie asked for a Hannah Montana CD and a spinning wheel! She narrowed it down to two items because she didn’t want Santa to think she was greedy. I asked her, “What if Santa doesn’t bring you a spinning wheel?” Maggie replied, “That’s o.k., Mom, I’ll just get one from your shop.” She wants a Ladybug to be specific. We shall see.

Ryan asked for Hockey Gloves, a Hannah Montana CD, and an ice mat. I have a question. What is an ice mat? Ryan said it’s a mat you put down that looks like hockey ice so he can play in the kitchen – which he already does without the ice mat. I’ve never seen anything like it. I’ve never heard of it. My son is an inventor. Of course I think it’s too close to Christmas for the prototype.

Friday night I went shopping to TJ Maxx and Target and finished off the last of the shopping. It’s a smaller Christmas this year for many reasons. A big one is that we have enough. Also, in only 22 more days, we are going to Disney World. Two good reasons to cut back. 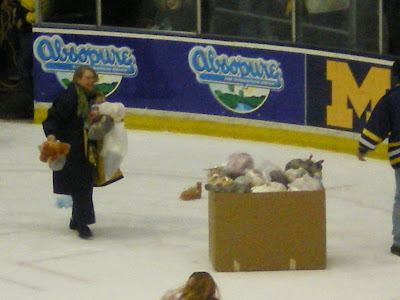 Saturday night we went to the Michigan Hockey game. it was Teddy bear Toss night. They collected more than 750 teddy bears to benefit Mott Children’s hospital. We look forward to this night every year and the kids got to go along this year.

And to top off an already great week Ryan was chosen to play Score-O. He went down on the ice and got to shoot at the goal for a chance to win prizes. 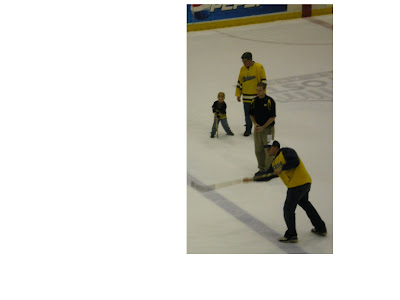 He was a little unsure at first but as soon as that stick was in his hand he was ready. 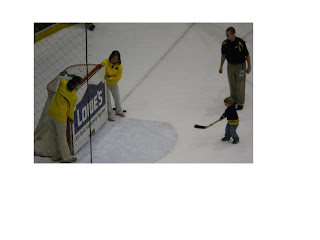 And he made his goal with no problem. Another example of the benefits of kitchen hockey.

Now the next problem. When I got to the shop on Saturday there was a box of new spindles from Greensleeves. I believe I got 26 new spindles and I want to keep at least half for myself. I have no pictures because I don’t want to tease you all if I decide to keep them. I already own at least 13 spindles. I love them. I love the wood grains. I love spinning with them. But…if I want to continue paying the rent and having a shop I will have to give them up. I will narrow it down to one to keep and sell the rest. Seriously, I’ve already spun on many of them. LOVE!

O.K. off to knit. There’s a little thing I promised to finish for Chelsea last Christmas and now a year has passed… Pictures when it’s done.

7 thoughts on “Sneakers and Santa and Shooting and Spindles”