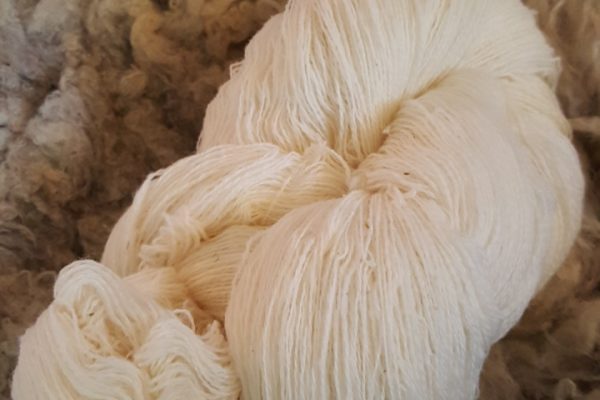 If you follow me on Instagram or Facebook, you know something’s up so I thought I’d do a little blog series so you can all follow along with me in more detail if you want.

I started weaving at least 10 years ago. I thought I should learn because I was selling looms in my shop and I thought I should know how to use them if I was going to sell them. It wasn’t something I thought I would persue seriously at the time but I took a few classes.

But over the last several years Ive begun to think about weaving more and more. I bought 2 floor looms. I had my friend Sara lamb come for a week for a semi private lesson. I flew to Vashon Island for a week long class. All the while I was figuring out what exactly I wanted to do with my weaving knowledge.

About 2 years ago I finally knew but I had no idea how to approach it so the idea percolated. What I really wanted to do was make faric yardage for clothing. It made sense for me. I like to spin fine yarns and I used to be a dressmaker in a previous life.

In addition to my clothing focus I was curious about how different kinds of wool act in fabric. Of course I had already looked at that a lot with knitting but only a tiny bit for weaving and not anything bigger than a 4 by 4 square.

I decided that this was the year to get to work. I often feel like I don’t have time for personal persuits because of class prep and sample spinning and article writing. But I need to carve out some time for my own projects because I feel like it will help me grow as a teacher.

I started spinning the yarn for this first project back in April or May – I can’t remember. I decided to use my Schacht Reeves 30″ wheel for this spinning because it’s quick, it has the light take up that I love and I am very familiar with the wheel which is pretty important when you want to get a lot of yarn spun very quickly.

I decided 2 work with 2 ply at first although I want to see what happens to fabric if the yarn is 3 ply too. But I have to make some decisions or I’ll never get going.

So 2 ply. And I wanted to spin it pretty fine so it would be appropriate for every day wear. I chose

to begin with Columbia because I love that wool so much and I have enough and it is roving so I could spin it pretty quickly with a supported long draw. I made a sample card like I do every time I’m going to be doing a giant project. I like to put a 2 ply and 3 ply sample on my sample card so that if I ever want to spin the yarn again, I have a record and I know what the yarns would look like.

The 2 ply yarn is about 18 wraps per inch after finishing. Columbia is a very fluffy yarn and puffs up a lot after spinning and washing.Similar to how Cormo acts.

In the middle of all of my planning and spinning, a new project came up that I’m working on with Jillian. This project will also include spinning for weaving except we’ll be using rigid heddle looms rather than floor looms. Well! I thought this would be a great opportunity to make the same skirt with the same yarn on the rigid heddle loom as I am on the floor loom and compare the fabrics.

The Schacht project will be posted two times per month for 4 months on the Schacht blog. Here’s a link to the first post in the series: http://schachtspindle.com/smith-and-moreno-take-on-weaving/

So, back to the floor loom. I started spinning before I really knoew what I was going to do, what the skirt would look like or how much yarn I would need. After I had about 2000 yards of 2 ply spun

and plied, I decided I should think about it. Since I now knew I would be making 2 skirts that were exactly the same I had to make a skirt that would fit the finished width of a 15 inch rigid heddle fabric – which would be apporximately 13 inches wide. Taking my own measurements into consideration, I decided to go with a six gore skirt. This was after thinking about and discarding ideas for a half circle skirt or a wrap around skirt. both of which wuld have to be pieced with seams which would be horizontal rather than verticle.

Now having decided on a 6 gore skirt that would be about knee length I could get down to figuring out how much yarn I would need to spin.

Taking draw in into consideration on the floor loom I decided to make the warp 30 inches wide so I could fit 2 pattern pieces side by side. I wanted a sample of the washed and unwashed fabric after it was woven so I added a bit to the length so I caould keep a bit.

Assuming 20 picks per inch woould mean I would need approximately 2400 yards for weft.

That’s a total of 4800 yards plus a few hundred for fudging.

because it’s easier to carry around. I plied all of the yarn on my electric spinner that was made by Abby Franquemot’s husband. They call their company questionable origin. I used that machine to ply on because it’s crazy fast.

You can check out what they’re doing on Facebook.

I have a lot more to talk about with this project so watch the blog for upcoming posts.

Next I’ll talk about weaving and finishing the fabric, how it work, things I learned, and questions I have.

Then the skirt construction, including making the pattern, the sample skirt and making the final skirt.

Next, I’m doing a bit of embroidery to decorate the skirt, so I’ll talk a little about that; what yarn I’m using and how I’m going about it.

And last but not least, my future plans and how to proceed from there.

Keep your eyes peeled and if there is anything you want me to talk about or questions you have, please comment and I will tell you whatever I know.

3 thoughts on “The Great Skirt Project”