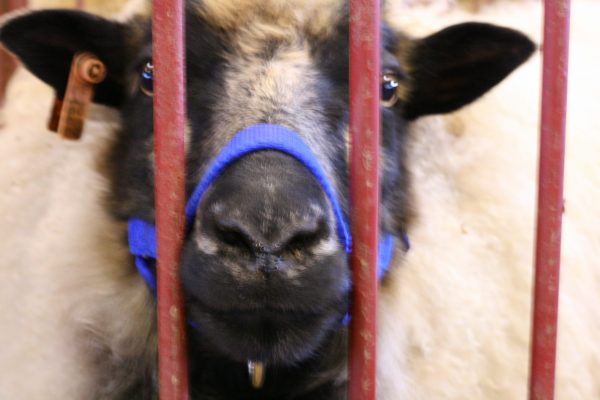 So I got home from North Carolina a week ago. It has taken me this long to begin to feel normal. I’m always a little extra tired and want to be a little extra quiet when I get home from a teaching. This week was a little different because I had decided to take part in #NaBloPoMo and I’m pretty proud of my progress with that!

Anyway, this was my second time being the wool judge at the Southeastern Animal Fiber Fair (SAFF). It takes place in Fletcher, NC right outside of Asheville. Let me just say this….I love being the wool judge. I’ve been judging fleeces privately to buy for myself, to buy for other people, at farms when the shepherds ask my opinion, for more than a dozen years. Of course, at first, when I stand up in front of an audience it feels a little different…especially when they strap one of those Madonna headsets on me. But then I begin to talk about the fleece that has been rolled out in front of me and it just goes back to me shopping for fleeces with my friends or a class.

When I’m judging I keep the class in mind and of course the fleece has to fit into the class it was entered in but then after that the fleece has to stand on its own. I talk about lock length, the overall fleece appearance, what it might be good for, what problems I see and if those problems can be overcome with a little patience or if they might need a bit more work. I talk about the most beautiful things about the fleece and why someone might want to take it home with them.

Last year there were plenty of nice fleeces but this year there were lots of spectacular fleeces. Clean and beautiful examples of their breed. Surprising crossbred fleeces that I wanted to play with. Super spectacular wool that showed how much work was put into the sheep to get that level of lovely.

Let me talk for one second about the fleece I gave the Judges Choice ribbons to….well, let me tell you what happens first.

The fleeces this year were entered into several categories such as fine, medium, primitive, and longwool. In addition there were some breed classes for the breeds that had lots of entries. I believe they consisted of Shetland, Icelandic, Jacob….I can’t remember…I think there were 2 more breed classes. So, the judge judges each category and class and gives a first, second and third if it is appropriate. Then after each class/category is judged all of the first place fleeces are brought forward and a best of show and a judges choice fleece is chosen. This year I was allowed to choose two fleeces for judges choice.

Now I’m just going to say this, there were so many spectacular fleeces this year that this was a hard decision. But, there were a few fleeces that stood out to me. One was a Gotland x Teeswater. It was lustrous and long and silky. The weight was right for the breeds it came from so I knew it hadn’t been skirted down to the best of the best locks. I stuck my face in that fleece in front of the 50 people who were watching me judge.

The second fleece was a white Icelandic. I can’t even tell you how fabulous this fleece was. It was soft all over and fluffy and bouncy and soooooooo white! There were actually lots of really great Icelandic fleeces and maybe my love for all white wool affected my judgement in some way but really you had to see this in person. This one I also gave judges choice because of the third fleece.

The third fleece that really stood out was also a cross. Last year I disqualified the fleece from this sheep because it had been entered into the longwools category and it was a double coated fleece. I remember the whole thing very clearly. The shepherd was unhappy because her shearer had told her which class to put it in. Last year the fleece was a totally dark brown/black color.

This year, this fleece was unrolled in front of me and I was amazed at its size and beauty. At the time, I had no idea this was the same fleece. I was just in awe of how gorgeous it was. How the outer coat was so long and gorgeous. The undercoat was fine and soft but not too short. the colors in the fleece were amazing and the color pattern was outstanding. I wish I had a photo of this fleece all spread out in its glory. Then I asked my assistant what breed it was and I almost fell over. It was a cross of Cotswold and Icelandic. My first though both last year and this ear was why would anyone do that!? And last year I was not impressed. But this sheep did his work well. I hope that the person who took this fleece home does it justice and I don;t often say this but I would be tempted to felt the cut end and keep the fleece intact because it was so beautiful.

Judging this year was long. We started at 1PM and were finally finished at 7:45PM. I’m not sure how many fleeces there were in total but it was a lot. And I was tired and stiff at the end but I loved every minute.

If you are looking for a wool judge for your festival or event keep me in mind!